NRC – Ensuring security along with secularism


The National Register for Citizens (NRC), first derived after the Census of 1951, has seen much controversy in recent times. Though the update for the NRC started in 2013, it only has data for the electoral roll up till the near end of march of 1971. Being hashed out because of its updating, it is also being reviewed by everyone in and outside of the pipeline of impact.

Many arguments have been brought up against the process of the NRC. These arguments may be justified, as they help policy makers identify loopholes that may have existed in previous editions.

India as a nation has always been a secular country. To enhance this, India has always been a nation that has accepted people when they required sanctuary. The term refugee has accounted for “person who owing to a well-founded fear of being persecuted for reasons of race, religion, nationality, membership of a particular social group or political opinion, is outside the country of his nationality and is unable or, owing to such fear, is unwilling to avail himself of the protection of that country; or who, not having a nationality and being outside the country of his former habitual residence as a result of such events, is unable or, owing to such fear, is unwilling to return to it”. This definition, provided by the Protocol Relating to the Status of Refugees is the widely accepted definition for this term, especially as it is entailed within the International Refugee Law.

This definition is given by the Protocol Relating to the Status of Refugees, a crucial treaty in international refugee law. India has been a safe haven for refugees and become, essentially, the refugee capital of the world. The Sri Lankan refugee, refugees from the Rohingya crisis and many others across the turns of history.

Even with the Tibetan refugee inflow, India has not only housed a multitude of refugees, but also taken a stance in its position on the refugee situation worldwide by taking in DaLai Lama. Not only has this been a statement to the Indo-Sino tension, but has also shown that India supports and respects all religious sentiments.

In the more recently popular, Bangladeshi and Chakma and Hejong refugees. According to recent census data, over 47,000 Chakmas live in Arunachal Pradesh alone. The Supreme Court of India has often held the humanitarian ground and assigned citizenship to many refugees. The Chakma and Hajong refugees included.

This had received massive opposition from groups in Arunachal Pradesh ( the state which hosts a large segment of these settled communities, which also often faces outburst of violence due to opposing views within the communities).

Over the years, India has allowed the refugees to be integrated into its society, following the principle of non-refoulement. The threat to the life of these refugees has always come first.

With the limited resources that India houses, this has become a massive threat to the community that is native to the land. The matter of discussion is no longer whether India should house refugees, since India has not negated the inflow of any human in need. However, to maintain the functionality of the economy for natives, along with the need to maintain a sanctuary that can protect the people. It is important that India and its policy makers formulate a framework that ensures that along with secularity, the resources of India are maintained and sufficient to support the livelihoods of those who pay for its fostering.

A few years ago, before the NRC was a popular topic in debate circles, a popular show on Doordarshan televised a show named “Chanakya”, an episode on the show, targeting the idea of “refugees vs. infiltrators” voiced with immense articulation the concerns the nation has about any refugee crisis occurring in the past decade and coming few years.

The link attached here will direct the reader to the video. https://www.youtube.com/watch?v=5i4WeOMU-vY 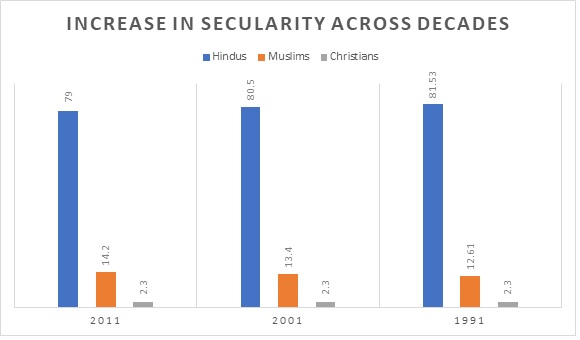 As is shown in the above graph, based on census data, India has only opened its arms to people from all religions in the name of humanity to ensure the global security and safety. Further, how it is mentioned in the video linked above, the concern is not the lack of protection being provided to those who are genuinely victims in their own homeland, but the issue of those who use this as an excuse, discrediting those who deserve sanctuary, and create a sense of fear in the innocent.

The NRC has ensured that there are optimal options for all to be registered. There are many options given to all to prove their citizenship and escalate the matter in case lower authorities do not accept it. These methods are being enforced by 30,000 government officers and 10,000 contract-based staff members, who will be available at the NRC Seva Kendras to assist all those who approach.

The number of those who have been excluded from the list has dropped by 21 lakh, to the current 19 lakh names. These people have also been assured justice with the Seva Kendras and reassured of the same by the Assam Chief Minister.

In conclusion, it is important to remember, that the discussion of NRC should not be curtailed along with the support for any associated government. Policy and Polity remain two separate entities that marry successfully under the scrutiny and thus correction led by its citizens. The conclusion of any policy in India will always be the welfare of the Indian citizen.