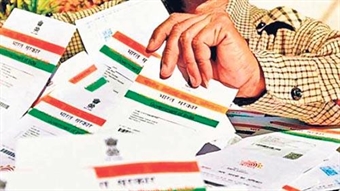 Amidst all the rhetoric shrill against the use of Aadhar for identifying beneficiaries of government schemes, the decisive thrust given by the BJP regime to this move has started delivering remarkable results. Linking all the monetary transactions with Aadhar has brought an unprecedented clarity in the country’s economic activity.

The Government of India has constituted a Committee of experts under the Chairmanship of former Supreme Court Justice B N Shrikrishna to study various issues relating to data protection in India and make specific suggestions on principles to be considered for data protection in India and suggest a draft Data Protection Bill. A White Paper has been drafted to solicit public comments on what shape a data protection law must take. On the basis of the responses received, the Committee will conduct public consultations with citizens and stakeholders shortly to hear all voices that wish and need to be heard on this subject. At the same time special efforts are being made by various government agencies to aware people about data leakages.

Aadhar linkage has revolutionized MGNREGS (Mahatma Gandhi National Rural Employment Guarantee Scheme) the most ambitious scheme of the times. 99% of these payments are on the electronic Financial Management System based on Aadhar linked accounts. The Central Government has ensured timely release of funds and States have responded by strengthening the implementation machinery to provide timely payments. The biggest beneficiary from the Aadhar linkage with the economic activities has been this poorest of poor segment of our country.

In fact, The Union government has saved Rs 57,000 crore, through the use of Direct Benefit Transfer  (DBT) in various public schemes, by weeding out corruption from various schemes by using technology.

Despite all these achievements, some cynics are creating a bogey in the name of data infringement. The Supreme Court bench is currently hearing the constitutional validity of Aadhaar. The opposers of Aadhaar feel that it is been used as a mass surveillance tool by the Government and the intention of linking Aadhaar is to track all the activities of citizens. The government is spending a huge amount on social welfare schemes and at these times when terrorism and money laundering faced by India, a fine balance needs to be built between citizens privacy and larger national interest. India has been taking pro-active measures to keep online data safe, after all data is indispensable as Oil in this century. So, in such scenario, it is futile to point fingers at data privacy. The need of the hour is to form a strong Data protection and Data governance law that can be relooked after every two or three years since this is a dynamic age.

Union government has busted many fake LPG connections, Ration cards, Bogus teachers, fake farmers registered for loan waiver schemes after mandating Aadhaar Linkages at the initial phase. More tax fraudsters are expected to be caught once finance department links Passports, PAN cards, DIN and TIN numbers with Aadhar. In fact, it will be major step in the direction of curbing black money.

Experts believe that these are interesting times for the Indian economy as the world is taking notice of every step India is taking. According to the International Monetary Fund (IMF), such emerging markets will drive the global economic activity. Asian economies led by India are picking up speed as policy and consumption-led tailwinds have given businesses a positive fillip. Global investors are supporting the pro-reform stance taken by India.

One must remember, Aadhar and its privacy measures has got India laurels from the world genius. Nearly to 14 crore out of about 30 crore Permanent Account Numbers had already been linked to Aadhaar and 70% of the estimated 100 crore bank accounts had been seeded. (UIDAI) has serviced around 10 billion authentication requests, and 3.5 billion eKYC request. The new facial recognition authentication and the virtual ID number that will be introduced shortly will enhance the safety of the system. The UIDAI and Government of India has stated that Aadhaar system hasn’t been breached so far and the security audit is conducted on regular intervals.

Bill Gates, on his visit to India recently had hailed it as a “12-digit lie detector,” while the World Bank’s chief economist Paul Romer had hailed Aadhar as bane for the world, if other countries could adopt it comprehensively. Meanwhile delegations from Morocco, Tanzania, Bangladesh and Afghanistan have already visited India to learn how the technology could be replicated in their own countries. Sri Lanka is also keen to introduce a mass digital initiative like the Aadhaar in India.

Prime Minister Narendra Modi in his address at this year’s World Economic Forum Summit in Davos has categorically stated that the upcoming decade will be an era of data indemnity and India will lead the world in this case! Aadhaar , being the largest biometric database of the world is a classical case of leveraging information technology to bring in transparency in public expenditure.