The Suppressed Voice of a Nun 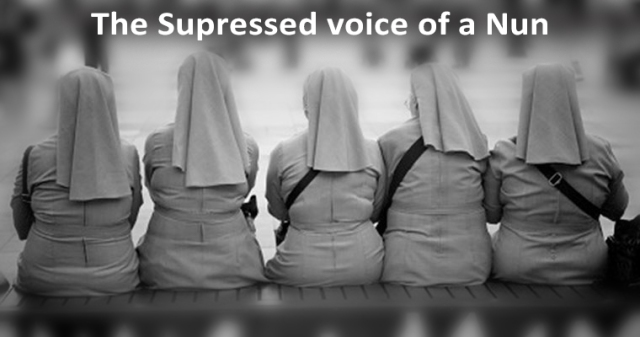 There has never been a time more disposed to discuss religious reforms than the present one. Women across religions have found their voice and are fighting for spaces long denied to them. The ongoing case in the Court which is debating the entry of women in the sacred Sabarimala Temple or the Haji Ali Temple is a welcome move. Irrespective of what the court decides, the fact that specific religious practices have been questioned and there is finally a section of people wanting to give equality of status and opportunity to every being of the country needs to be lauded.

But when there are talks of reforms in Hinduism and women are freely putting forth their opinions, the silence from other religions is deafening. But when it comes to treating women in their fold with respect and dignity, the standards have been vastly different. This is more so in the case of Christianity, as it is a religion that calls itself progressive and has at one point used that as a tool to colonise more than half of the world.

It bodes well to recall that Christianity is the same religion that propounded the Doctrine of Discovery in 1493 which through a series of papal decrees gave Christian explorers the right to stake claim to any land that was not inhabited by Christians. It also gave them the right to enslave or kill those inhabitants who could not be converted. It is this same notion of superiority that has continued to define the religion and the way its institutions function. The concept of lesser beings has never been so prominent as in the case of nuns. Though they form an important part of the religious order, their identities are essentially construed on the patriarchal norms of the Catholic Church. Once they become part of the order, they are rarely given any space to exercise their personal agency and are forced to live austere lives under male institutional authority. The dominant discourse that has made the nuns the embodiment of self-sacrifice has in a systematic and organized manner condemned them to lead lives where their real potential is forgotten. They are forced to fulfil roles that have been thrust on them.

Here, it is not necessary to get into the complexities of the issue to understand why the time has come to call for reforms in Christianity. The controversy surrounding the release of the biography of Sister Mary, who left her Catholic congregation in Kerala after 40 years of nunhood should serve as a wakeup call to all. In it she has recalled in excruciating detail, the physical, physiological and sexual oppression that she had to face within the holy premises of the Church. In 2011, even the Vatican had in an astonishing admission revealed that it was aware of priests from at least 23 countries abusing nuns. There couldn’t have been a more despicable revelation from the Holy See.

What is often missed when instances like this come to light is that the root cause of the problem dates to over 2000 years when the Catholic traditions were first handed down.  The moment a woman, willing to dedicate her life to the service of the God she believes in, is asked to wear the hijab-like habit, it marks the beginning of her servitude. Devoid of even the smallest pleasures in life, she is confined to professions where a woman is seen only in the role of a caretaker or a nurturer. By forcing her to cover her head, she is denied an existence and identity of her own. The injustice becomes momentous when reading in conjunction with two passages from the Bible:

1 Corinthians 11:5 reads: And every woman who prays or prophesies with her head uncovered dishonours her head, for it is just as if her head were shaved.

1 Corinthians 11:7 reads: A man ought not to cover his head, since he is the image and glory of God; but the woman is the glory of man.

The passages speak of a religion where misogyny is so ingrained that women are treated as lesser beings. The oft-repeated argument that nuns have chosen this way of life do not stand the test of reason. In Hinduism when sadhus and sadhvis choose asceticism, it is often used to enhance the quality of life of those around them. In politics, leaders like Sadhvi Uma Bharati and Swami Agnivesh have shown how society can be served even if one is on a personal journey to connect with the divinity. They have paved the way for infusing spirituality and morality in politics. And this is where the freedom of choice truly lies – it lies in choosing how best to serve the society and not in following orders prescribed by male authority.

The unfortunate truth is that for centuries male religious leaders have been interpreting teachings to serve their vested interests and subjugate women. When it comes to nuns, they have been systematically removed from the society that male priests get to be part of. They are alienated from the popular culture and are made to believe that they cannot serve in positions of authority. For a religion that claims itself to be free-spirited and enlightened, the absence of female leadership is striking. Can a set of beings chosen to serve God be considered inferior? That is a question which needs to be pondered over.

In 2016, an Austrian politician, provoked angry reactions when he posted a photo of two nuns wearing habits and sarcastically commented whether they were ‘oppressed women’ wearing burqas. The post lead to a strong backlash from the Christian community and was later withdrawn. But it needs to be asked if the sentiment and intention behind the comment were wrong? Because if Jesus were to see how some of his children are discriminated against and denied their fundamental rights in the name of gender, he would have crucified himself once again!

One response to “The Suppressed Voice of a Nun”