The Tamasha of Uttar Pradesh 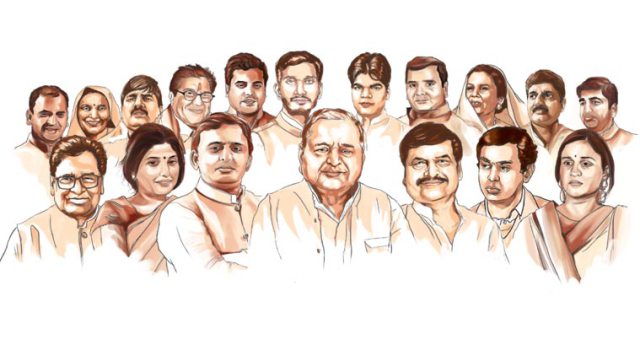 This also explains why even one family dispute threatens to dismantle the entire party. Just in the last few weeks, we have seen Shivpal Yadav resign from the post of state president, then get reinstated by party president Mulayam Singh Yadav, then, along with Amar Singh, get sacked from the state cabinet by Akhilesh Yadav. We’ve also seen party general secretary and Rajya Sabha MP Ramgopal Yadav expelled for six years, only to be reinstated and expelled again. The Chief Minister himself hasn’t been immune to this drama, as he too was sacked by party president and father Mulayam Singh Yadav on 30thDecember and was then reinstated just days later. With all this spectacle taking place, it won’t be wrong if one were to label it as the ‘Tamasha of Utter Pradesh’.

The electorate of Uttar Pradesh deserves better than this. Instead of a Chief Minister who is busy being engulfed in his own family disputes, and instead of being governed by political parties which are only interested in garnering votes on the basis of caste (BSP) and religion (SP), it’s time the people of Uttar Pradesh voted for a party that will be running an election campaign on the agenda and platform of development. For the last 15 years, be it when the Bahujan Samaj Party was in power or the Samajwadi Party, the state of Uttar Pradesh has grossly deteriorated. Be it crimes against women, corruption or lack of basic development, things only seemed to have gotten worse. In fact, according to the latest data from the National Crime Records Bureau (NCRB), there has been an alarming increase of 34% in crimes against women over the last 4 years alone and as far as corruption is concerned, the HRHM scam that took place under Mayawati’s government in 2011, where top politicians and bureaucrats allegedly siphoned off a massive sum estimated at ₹100 billion (US$1.5 billion) from the National Rural Health Mission, speaks for itself.

Communal tensions too have been at all all-time high during the past few years. The 2013 Muzzafarnagar riots were described as one of the worst instances of violence in Uttar Pradesh’s recent history, resulting in 62 deaths and 93 injuries. Not only did these riots cause the army to be deployed in the state for the first time in 20 years, but the Supreme Court also held Akhilesh Yadav and the Samajwadi Party prima facie guilty of negligence. While the state was still recovering from the carnage caused in Muzzafarnagar, more communal riots broke out in Fatehpur in 2016, resulting in the injuries of 30 people. Needless to say, the current state of law and order in Uttar Pradesh has become another valid reason to label it as the ‘Tamasha of Uttar Pradesh’.

With elections just around the corner, the voters of UP have to make an imperative and integral choice, one that will directly affect their safety, development and betterment. Having to go on for another five years of lawlessness, corruption and family theatrics is just not an option anymore. It’s time they opted for change, and put the state on the path towards development and prosperity.

Truth alone triumphs, not falsehood
Through truth the divine path is spread out
by which the sages whose desires have been completely fulfilled, reach
where that supreme treasure of Truth resides.