In my un-relinquishing quest to get to the exact reason of the unprecedented delay in delivering Mumbai Metro, I tried to look around, beyond India.  I delved into similar projects across the globe to find out delays if any. And what I discovered is astounding. Here are a few cases.

The Singapore Mass Rapid Transport System began construction in 1983. The project initially began in the central part of the Singapore where the demand for such a service was highest. Within 4 years, the North South line passing through the central part of Singapore became operational i.e. in 1987, it was opened for public to use. Another 21 stations were subsequently added which began operations by the year 1990 with an astonishing ahead of the schedule by 2 years. Today Singapore has about 152.9 Km of metro line operating with 108 stations. The expansion of the metro is underway keeping the estimations of population increase & transportation needs of the year 2040.

The London underground is the public metro of London serving a large part of Greater London and parts like Buckinghamshire, Hertfordshire and Essex. It is the world’s first metro transport underground line which started in 1863and since then evolved over the years and is still continuing to evolve with the increase in population and also the needs of the people.

From the compiled date it is evident that Mumbai’s total area covered by metro is 1/4th of that of London while it’s population is almost double of that of London. Abysmal comparision, isn’t it?

I guess, we have got used to be denied and indulge in living in such poor condition of infrastructure.

Well, let’s look at the future. 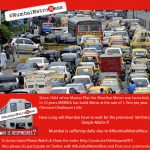 While other global cities have huge metro projects in place and expanding aggressively keeping in view of future needs, i.e. of 2030-2040, Mumbai metro has taken more than an abysmal 10 years to construct just 11.7 Km.

At this pace, forget being a global city, will Mumbai ever complete even the initially planned 160 kms ?

Doesn’t your blood boil like mine? Why don’t you join me when I question the authorities?

Where does Mumbai Metro stand today?

How many kilometers of Metro line in Mumbai has been laid?

At this place, will Mumbai Metro will it ever be completed?

Is the metro line that is being laid in Mumbai future ready?

What and where are the bottlenecks which are hampering the completion of the projects?

And is our government & authorities incapable of removing bottlenecks?

Or they lack the intent?